Twelve weeks (or roughly one cour) ago, humanity had first contact with the evil space empire. Since then, the empire had sent one of its henchman to attack earth every week. Although the earth's mechas managed to fight them off, earth's population and environment have taken a huge toll.

To end the invasion once and for all, an elite squadron is sent to sabotage the empire's mecha factory. The problem? Earth only has an experimental one-use teleporter. Once there, you will be deep into enemy territory with no backup.

Success or failure, you won't be able to make it back alive.

Swansong of Blood and Tears is a tabletop RPG by W.H. Arthur (@Aryl_Ether on Twitter and itch.io), made for #sadmechjam.

The game is played with a Jenga tower, by one gamemaster and 2-6 players. The 4-page PDF comes with all the rules you need (in full-colour and printer-friendly versions). Optionally, you can print out the character sheets, where you can doodle your own mecha!

SoBaT is inspired by super robot anime such as The King of Braves GaoGaiGar Final and Gurren Lagann. Very often in the finale, the protagonists have to take their fight to the big bad, with odds stacked against them. The good guys would die one by one, often in big heroic sacrifices, and sometimes even the main character bites the dust. The aim of this game is to reproduce those final struggles.

I borrowed the action-resolution mechanic from Dread by Epidiah Ravachol. The players pull from a Jenga tower when they make a difficult action, and their character perishes when the tower falls. Every character death comes with a heroic sacrifice, bringing the team closer to its goal.

If people like this game, I may write more additional characters and scenarios in the future.

P.S. I originally started with a 1d6 system, where success with a cost is the most probable outcome, and the player mechas would make heroic sacrifices when their HP is down to zero. I wanted to get rid of the HP system, and remembered someone telling me about heroic sacrifices in Dread. Therefore, I reworked the dice outcomes into number of blocks pulled from a Jenga tower. 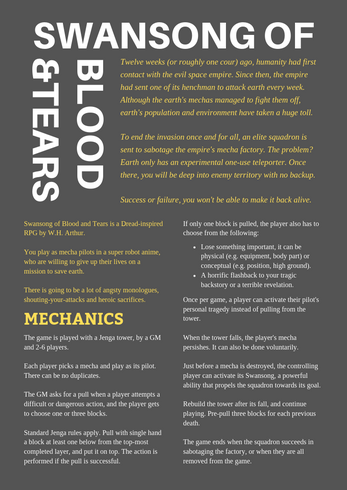 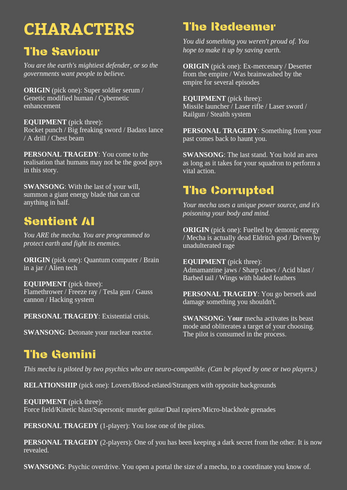 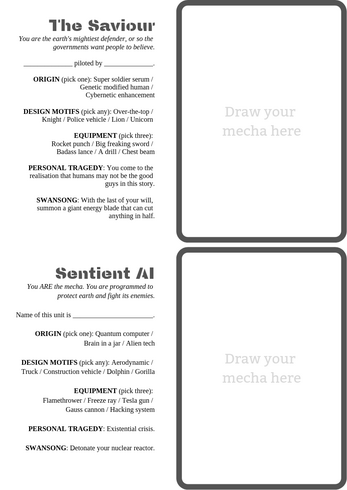