The Steadfast and the Rebellious is a tabletop role-playing game and a storytelling game. It is a hack of REINCARNATION REDUX: Our Requiem by Rae Nedjadi, written for Jammi Jam Jam.

You are all inhabitants of the city, and you have been living in false peace under the rule of the demon king. The last wall, which offered your city limited protection against the demon king's tyrannical rule, has now fallen. Citizens are left with two choices; do everything the tyrant demands, or resist. Will we rise victorious against the demon king, or will our resistance be futile? We play to find out.

This game is intended to create a quick but rich prologue for characters who revolt against the demon king in a fantasy setting. It is possible to use this game to create a setting and characters for your preferred game about enclosed spaces and giant lizards.

To play this game, we will need 1-2 hours, 2-4 players, a deck of playing cards, a conductive space, index cards, writing materials and a copy of this game (digital or printed). One of the players is the Facilitator, who has read this document beforehand.

In order to download this game you must purchase it at or above the minimum price of $2.99 USD. You will get access to the following files:

The Steadfast and the Rebellious v1.2.pdf 6 MB

Support this game at or above a special price point to receive something exclusive.

If you are unable to afford the listed price of The Steadfast and the Rebellious, you can grab a community copy. This goes especially for people in marginalised communities, and those who want to review the game. I will add more communities copies as further purchases are made.

This was... fun is maybe the wrong word but found playing this to be such a powerful experience and I think the message in this game is even more essential right now.

Definitely interested to play a longer session of this, in the future, and see how it holds up or could be extended further.

Thank you for making this!

Thanks for the comment! When I wrote the game in 2019, it was inspired by both historical and current events at the time. It is sad to see history repeats itself time and time again. 😢

Agreed! You’ve probably already seen there’s a Ukraine bundle being put together in the Community section that I think this game might fit perfectly with.

I have submitted this game to the bundle. I feel more comfortable making PWYW games, but bundles only accept paid games, so I keep submitting the same few games to all the bundles. 🙈

Played a session of this with four experienced players. Here's what we thought:

* the four character types are iconic for fantastic setups, we did a steampunk game with some hidden sorcery and it worked just great

* The setup is great, the bonds are interesting. As a situation generator the game works well. "We could play this in Primetime Adventures or some other game!" was a comment we all agreed with right before we did the last page.

* the resolution doesn't seem completely functional from a game perspective; with four players there's no reason for any player to defect from the group. Further, with that many cards being dealt there's really very little chance of failure or even partial failure. We had to pick something other than "complete success" if we wanted to explore any other ending.

* the game directs you to keep some cards and discard others, but you never use the ones you keep and the discard pile never comes back. not sure if this is a mechanic that was deleted at some point

* if you wanted to flesh out the strongest part of the game, the situation creation, with some specific rules for playing out particular bond expressions or the appearance of the obstacle, etc., this could be very interesting.

* because each of the character types has their own sections, you could easily create playbooks which each character stepped through as they played and create a unique artifact for everyone at the end.

Thanks for playing the game and commenting!

The Steadfast And The Rebellious is a maximum four-player card-based storytelling rpg about a fantasy city rising up against its conquerer.

It's 11 pages, with a lot of great, colorful photo art, and a bright-rather-than-grim punk vibe.

Gameplay-wise, Steadfast uses a deck of cards to lay out the flow of the narrative, and the game is quite structured. You draw a few cards, play one, and this determines which option off of a chart happens next. You have a lot of freedom to narrate the results, and the conclusion to the story is ultimately open-ended, but this isn't a game where you get bogged down in minor dice rolls and the minutiae of accomplishing your objectives. You accomplish them, and then the book hands you your next question.

Because of this, Steadfast plays quick. It's good for bite-sized pickup games, but it might struggle to play a campaign unless you make some mechanical tweaks.

Overall, I would recommend this to anyone who wants a quick, portable rpg that spins a high-energy fantasy story about heroes vs tyrants.

Thank you for your review! :) 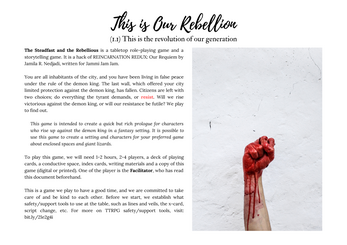 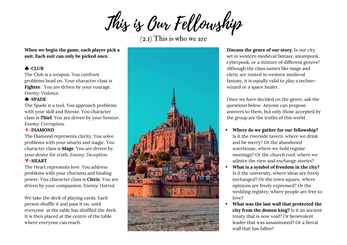 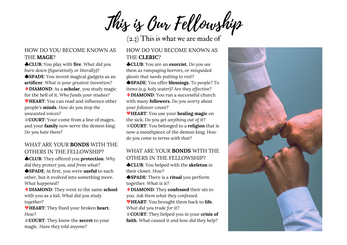