Superhero Cinematic Universe TTRPG is a series of stand-alone one-shots that can be linked together to form a larger narrative.

In The First Knight, you tell the story of the original superhero; a knight who battled against an ancient evil. To play this game, you will need 3-6 players including a master of ceremonies (MC), at least 6 six-sided dice (or a digital dice roller), a way to take notes, and 2-4 hours.

This is a story that took place a long time ago, during a war between good and evil. The evil forces have claimed a mystical artefact that can turn the tide of war. The First Knight, aided by their trusted allies, is tasked to retrieve the artefact before it is too late.

Chrck out a quick review of this game here!

Alright, let's open this up and have a look. Right away, we're getting a really strong premise here. This is the first in a series of one-shots that can link together into a an epic, larger narrative. This has some serious cinematic universe energy already, and that's what we're here for, so heck yeah.

The text immediately calls out future releases to string together a connected universe, and that's dope. And the payoff of playing all those games and then getting to play in a superhero team-up game? Yes. This is the exact premise I've thought about every time I've played or ran a superhero game. This game is setting out to finally pull it off. I'm in.

We get some instructions about the game right away and then some flavor text to draw us in. It works well because it's short and sweet and not a long and drawn out exposition piece.

Safety tools are up next—good to see them at the forefront here—and then we go into the How to Play and mechanics section. The play section is short but informative, written in a way that anyone can pick this game up and play with their friends. It's designed as a one-shot, so this tracks; it shouldn't be hours of reading or filled to the brim with rules.

Speaking of rules: the basic mechanics are rolling 3 six-sided dice and trying to meet or beat 12. Yep, this is good. I've always been a fan of D6 systems, and this looks like it's stripped down to what needs to work and then gets out of the way.

A setting primer directly follows the rules: a series of questions that you answer as a group to flesh out the world. These are not little ad-lib questions that make a small change in a predefined world. These things shake it up. We get a direct call out to setting the game in the 20th century too, so ya'know, doesn't have to be horses and swords (but that's there too.)

The game lays out some story beats, including some prologue setup, that can help kick off the game. The setting of the game is wide open, but there's a bit more definition in terms of what the story we're trying to tell is. The big bad has some kind of powerful artefact, and the First Knight needs to get it back before world ending stuff happens. That's the bones of the idea, but there's lots of implied and suggested twists to make it your own.

One of the big problems with one-shots is that it's hard to pace them, and the First Knight acknowledges this problem and provides some tools to help alleviate it. There's a light and easy mechanical engine with clocks built in, so as the MC you can always sort of grasp where the story is, and what sorts of things could conceivably happen next.

The MCing section is familiar to anyone who's played a PBtA game before, but it's trimmed down and also mixed a bit with positioning from Blades in the Dark. This is a good move and thinking about position—especially in the superhero genre—should definitely be on the forefront of an MCs mind. Like PbtA, MCs don't roll dice, but make moves based on the PCs.

Alright, playbooks. The meat. These are nice and easy to read and understand, which is a must for one-shots. The playbooks have roles (like Super Soldier), and those roles have tags (like Superhuman Strength). When you apply a role, you get a bonus. When you apply a tag, same deal. (Edit: fixed for clarification I recieved from comment below.)

Each playbook also has special moves. When I say moves, these aren't complex multi-step moves with tiers of success, these are straight up things you can do. They've got a trigger and a result. Another point in the favor of The First Knight, the moves are perfect for the playbooks but not so complex that the game bogs down in the minutiae.

Other than The First Knight, you've got The Lancer (a friend/rival), The Agent (a spy), The Arcane Scholar (scientist-type), and The Bard (a hype-up character.)

Apart from The First Knight, the other classes can (and in some ways, are expected to) perish during the game. This is an origin story, so that's on par. They've got special abilities that trigger if they do go down during the game, and that lends weight to the cinematic feel of the game.

If I had to voice one critique, it's that while the Bard playbook is great, it'd be one or two steps harder than the rest to get it into a more modern setting. Not impossible, mind you. Just an extra step or two.

The book is well put together and surgically designed for one-shot play. This is a popcorn night game where everyone at the table is going to be buying into the tropes and having a great time. This game could be the start of your own cinematic universe. And that's really cool!

Thank you very much for your review and the kind words! I really appreciate it!

Quick point of clarification: when you apply a tag/role, you add +1 to your role. You don't get more dice. From the rulebook:

For example, the First Knight attacks an opponent with their chosen weapon. They use the role Super Soldier, and all 3 tags under it are applicable, so they roll 3D6 and add 4 to the total.

Oh wow, I totally just misread that completely and the example. I always want to roll handfuls of d6s and saw what I wanted to see. Thanks for clarifying!

Thanks The Dev Team for pointing it out. I decided to go for a lower number of tags (compared to Lady Blackbird), and it was easier to work out the probabilities with the sum of 3D6. Without role/tags, a character has just over one third chance to succeed. With a role and 1 tag, the odds is increased to just under two thirds. 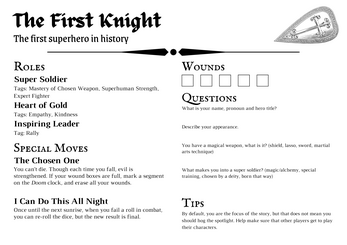 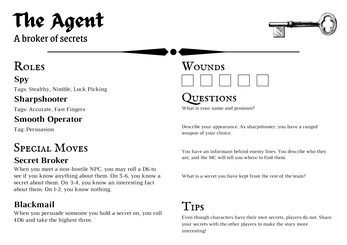 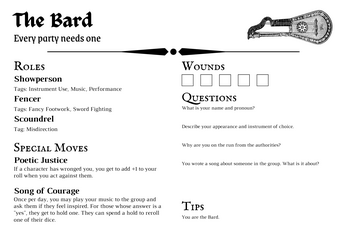